This being summertime, with all its distractions, and me being tied up with my freelance editing and personal writing projects, I'm dipping into my files for something to post on my blog. Here's an article that appeared in 2003 in the Bulletin of SCBWI.

The television sportscaster was speaking of ski jumpers at the Winter Olympics when he quoted the elder Holmes (the physician, not the Supreme Court justice). I was glued to the TV, rooting for the teenaged Harry Potter look-alike from Switzerland to win his second gold medal. But the Holmes quote sent my thoughts skidding off the slopes and slamming up against the imaginary stone wall of the "rules" of grammar.

Awaiting me at the wall were those writers who feel so tyrannized by the rules that they are scarcely able to press ahead with a sentence or a paragraph for fear of making a mistake. The stern voice of their eighth-grade English teacher rings forever in their ears: "That's a preposition! You may NOT end a sentence with a preposition!"

Begging your pardon, Mrs. G (my eighth-grade English tyrant was Aunt Bea without the dimples): When I write dialogue, I may and MUST often end with a preposition. "What did you do that for?" "Who are you going to the game with?" That last question, if recast to please the grammarian--"With whom are you going to the game?"--could only be spoken by a Chauncey Uppercrust kind of character. His formality would distance him from his peers. Most people don't talk that way.

To write dialogue that sounds natural, to narrate in a natural voice, to tell a story ringing with authenticity: these are the writer's concerns. Whenever "good grammar" gets in the way, the grammar must yield.

Creative writing admits the exceptions and recognizes that there are no real rules governing the English language. There are only guidelines, and the aim of the guidelines is communication: clear, evocative, successful. Janet Aiken, in Commonsense Grammar, makes the case beautifully: "Good grammar is not merely grammar which is free from unconventionalities, or even from the immoralities. It is the triumph of the communication process, the use of words which create in the reader's mind the thing as the writer conceived it ..."

While we're debunking grammar myths, here's another old favorite from a standard English education: the prohibition against splitting an infinitive. Some Mrs. Grundys do not dine with people who split infinitives, but I hold with George Bernard Shaw. He once complained to The Times of London about a tin-eared editor:

"There is a pedant on your staff who spends far too much of his time searching for split infinitives. Every good literary craftsman uses a split infinitive if he thinks the sense demands it. I call for this man's instant dismissal; it matters not whether he decides to quickly go or to go quickly or quickly to go. Go he must, and at once."

Some years ago, the editors of the Oxford English Dictionary sent the old "rule" packing, too. If a split infinitive sounds right and reads right, then it is right. (This may explain Gene Roddenberry's refusal "to go boldly ... ")

And what about the ban on starting a sentence with and or but? An unforced, natural style may put those two words to good use as transitions. In Ursula Le Guin's A Wizard of Earthsea (winner of the Horn Book Award) is a prime example: "But all this is hearsay; wizards will not speak of it." Le Guin started not only the sentence but also the paragraph with but, and it's a one-sentence paragraph. (Remember what you were told about one-sentence paragraphs being "wrong"? You don't still believe it, do you?)

Where, oh where, does the comma go? A grammar book's section on comma usage can run to 15 pages. Space does not permit such treatment here. But the "serial comma" deserves a mention, if only to help ease tensions between the journalism camp and the larger world of publishing. Newspaper style omits the final comma in a series: "red, white and blue." The Chicago Manual of Style favors use of the serial comma: "red, white, and blue." Neither is more correct than the other, but many book publishers follow Chicago style. Though I'm a journalist by training, I prefer the serial comma because it gives equal weight to each member of the series and avoids lumping the final two items in together.

The key to sensible comma usage generally is to know why you are using the punctuation. Be able to account for each comma you use. A comma makes your reader pause, if only briefly. Do you want that pause? "She looked up, and there he was." That comma adds an element of suspense. "She looked up and there he was" is more a statement of fact. If a comma has ever stopped you cold, you'll find it worthwhile to check a grammar guide. But know that comma usage varies with different writers. Some use them heavily; others use them hardly at all. "The use of the comma," says The Chicago Manual, "is mainly a matter of good judgment, with ease of reading the end in view."

I hope this brief look at grammar mythology will help convince the paralyzed writer that the conventions of English usage are merely that: conventions, customs--habits. Grammar is a tool, not a tyrant. Learn it. Use it. Make it serve you. Never fear it.

And listen to Robert Burton (The Anatomy of Melancholy, 1621), who told us: "No rule is so general, which admits not some exception."

A journalist turned historian and fantasist, Deborah Lightfoot Sizemore is the author of three books of Western history and biography, including the middle-grade biography Trail Fever: The Life of a Texas Cowboy, published under the byline D.J. Lightfoot. Her books-in-progress are fantasy novels.
Posted by Deborah J. Lightfoot at 3:31 PM

For paperbacks or e-books, visit www.waterspell.net

Deborah J. Lightfoot
U.S. Southwest
I began as a journalist, or at least that's what I got my degree in. After college, I worked for a newspaper, then as a magazine editor and feature writer. These days I earn my living as a freelance editor for a national nonprofit organization. I've written three award-winning books of history and biography. I'm a member of The Authors Guild. My newest work is a fantasy, WATERSPELL, an intricate, multi-layered trilogy about a girl and the wizard who suspects her of being so dangerous to his world, he believes he'll eventually have to kill her ... which poses a problem for him, since he's fallen in love with her. Web site: www.waterspell.net

Talk to me at Goodreads:

Let's strike up a conversation.
Goodreads 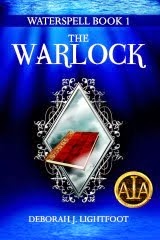 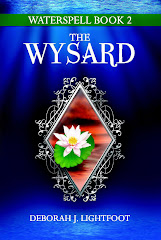 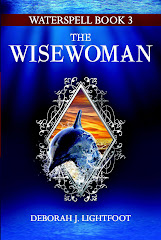 Where to Find Me Online: